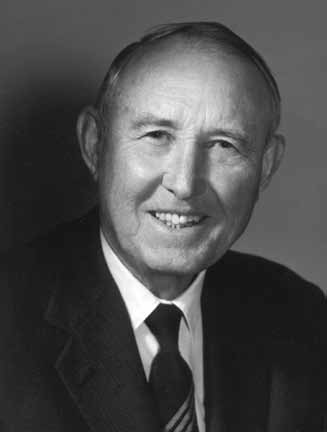 The D.W. Brooks Lecture Series and Faculty Awards for Excellence are named for a Georgian whose contributions to agriculture are respected worldwide. An alumnus of the University of Georgia College of Agricultural and Environmental Sciences, D.W. Brooks (BSA—Agronomy, 1922, MSA—Agronomy, 1924) devoted his career to improving lives through innovations in agriculture.

Brooks, of Royston, Ga., was the founder and chairman emeritus of Gold Kist, Inc., an Atlanta-based farm cooperative that began as the Cotton Producers Association in Carroll County. He also started Cotton States Mutual Insurance Company in 1941 to provide farmers with insurance.

As a testament to his life-long legacy, Brooks began his career teaching agronomy at the university following his graduation and later came back as a guest lecturer in his late 90's to impart knowledge he learned as a businessman.

“Mr. Brooks was a hero and mentor for several generations of Georgia agricultural leaders,” said Georgia Commissioner of Agriculture Gary Black, “Farmers and consumers alike continue to benefit from his legacy of service today.”

With a wealth of knowledge and contacts around the globe, Brooks advised seven U.S. presidents throughout his life on various policy and trade issues related to agriculture. He was also honored as the first inductee into UGA's Agricultural Hall of Fame; received the Distinguished Agribusiness Award from the Georgia Agribusiness Council; and was named Progressive Farmer's “Man of the Year in Agriculture in the South.”

CAES hosts the annual lecture series and faculty awards for excellence celebration in his memory.

The D.W. Brooks Faculty Awards for Excellence were initiated by the UGA College of Agricultural and Environmental Sciences to recognize faculty each year for excellence in teaching, research and Extension.

The teaching award was established in 1981 to recognize faculty members who make outstanding contributions and maintain excellence in the teaching program of the college. In 1983 the awards expanded to include research, Extension and county Extension programs. An award for international agriculture was added in 1988. The D.W. Brooks Faculty Awards for Excellence include a framed certificate and a $5,000 cash award.

The D.W. Brooks Lecture is named for the late D.W. Brooks, founder of Gold Kist, Inc. Brooks started Cotton States Mutual Insurance Companies in 1941. He advised seven U.S. presidents on farm and trade issues. Among his many honors, he was the first inductee into the UGA Agricultural Hall of Fame.