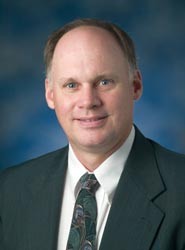 John P. Beasley, Jr. is a professor and Cooperative Extension peanut agronomist in the crop and soil sciences department of the University of Georgia. He is based at the College of Agricultural and Environmental Sciences' Tifton campus.

Dr. Beasley was hired as an assistant professor and Extension peanut agronomist for the University of Georgia in 1985. In 1991 he was granted tenure as an associate professor and in 1996 was promoted to professor.

Dr. Beasley has served UGA, the American Society of Agronomy and the American Peanut Research and Education Society on numerous committees. He served a three-year term on UGA's Promotion and Tenure Committee, including serving as chair in his final year, and represented the College of Agricultural and Environmental Sciences on the UGA University Faculty Council for a three-year term. He has also served as interim department head for the crop and soil sciences department.