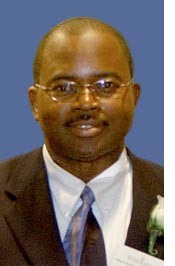 Dr. Casimir Akoh is a prominent scientist who has made significant and creative contributions in basic and applied research in the area of lipid modification. He has quickly gained national and international recognition for his work on fat substitutes, structured lipids, flavor and fragrances.

Akoh discovered eight fat substitutes that compete with olestra as zero- or reduced-calorie fats. Several of these have been patented. His research papers have been cited more than 1,200 times according to The Institute for Scientific Information Citation database, an indication of his stature in the scientific community.

Overall, Akoh's research resulted in more than 300 publications, which include 121 refereed journal articles. His research and publications on Georgia blueberries, muscadine grapes and Vidalia onion nutraceutical components are helping position the state as a leading raw-material supplier for the nutraceutical industry.

Akoh's work has received more than $2.7 million in research funding from various sources. In 2002 alone, he presented papers on structured lipids in Spain, Turkey, Taiwan and across the United States. He edited the first authoritative book on food lipids for classroom use, titled, Food Lipids: Chemistry, Nutrition and Biotechnology, published in 1998. The textbook was revised, updated and published as a second edition in April 2002 and is now used worldwide for lipid instruction.

Akoh served as the technical program vice chairperson for the Minneapolis annual meeting, serving as the chair of the Biotechnology Division, associate editor of Inform and Journal of American Oil Chemists' Society. He serves on the Editorial Boards of the Journal of Food Lipids, Journal of Food Science and Food Chemistry.