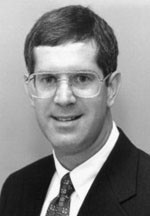 Dr. John M. Ruter was hired in 1990 and given the responsibility of developing applied and basic research programs to support Georgia's container and field nursery industry. No facilities existed at the time he was hired, but Dr. Ruter immediately developed a nursery crop production research site which has become a design model for the industry. The research developed in this facility includes his "Pot-In-Pot" (PIP) production system for container grown plants. The concept of the PIP system is to reduce environmental stress on the root system of container-grown plants by providing an inexpensive insulating layer around the pot containing the root system of the growing plant. The result is a plant whose root systems experience lower temperatures, use less water, fewer plants lost due to toppling, and more rapid plant production. The net result has been increased grower profitability from an estimated 700,000 PIP units in the Southeast. The economic impact of his PIP research has been estimated at $45 million.

Dr. Ruter is a national leader in developing improved fertilization and irrigation strategies for the container industry. This research is of extreme importance to the industry due to environmental concerns with nutrient concentrations in run-off water from container industries. He has researched the use of slow-release fertilizer formulations that will save an estimated 30 million pounds of fertilizer use in Georgia, alone. Hence, environmental consequences of the container industry are being minimized. When combined with his cyclic irrigation system, he has demonstrated that controlled-release fertilizers increase the uptake of nutrients, increase plant productivity, and improved water use efficiency with the end result of improving plant nutrition without the environmental consequences. In short, his research is helping producers cope with a diminishing water supply in an environmentally sensible manner by reducing the risk of contaminating groundwater with nursery leachate.

Another environmental concern of the container industry is burgeoning landfills with plastic refuse. Hence, Dr. Ruter's research investigating use of copper hydroxide impregnated fiber containers and expanded the market for fiber pots. His research has demonstrated that fiber pots increase plant growth over plastic pots and, thus, increase the profitability of the producer. For example, Transplant Nursery, Inc. is a Lavonia Georgia based company that has reduced the time to produce their Pieris from two season to one simply by switching to fiber pots. In addition, the plants grown in the fiber pots were of higher quality and had greater market value than those grown in the plastic pots. Fiber pots thus have great potential for reducing the flow of plastic pots into landfills.

Dr. Ruter's research is a benchmark for sensible scientific effort towards resolving emerging environmental concerns as Georgia's population dynamics and agricultural industries change. He has been strategic in prioritizing his environmental research projects with the type of forward-thinking necessary to make his efforts relevant to today's needs and concerns shared by the State, the industry, and society as a whole.