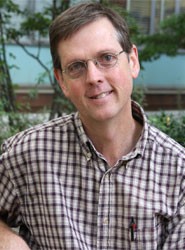 Michael R. Strand, researches the field of parasite-host interactions, an area of study relevant to both agriculture and medicine. Insects play an important role in the transmission of several plant, animal and human diseases, and parasites play an essential role in controlling insect pest populations.

Developing approaches to disrupt transmission of insect-vectored diseases and using pathogens for control of insect pests depends on understanding how insects respond to infection. Dr. Strand's research addresses several issues in these areas. His laboratory is highly interdisciplinary with studies ranging from genomics and molecular biology to ecology, evolution, and pest management.

In the UGA Department of Entomology, Dr. Strand holds joint or affiliated appointments in the Center for Tropical and Emerging Global Diseases, the Faculty of Infectious Diseases, and the Department of Genetics.

He has authored or coauthored more than 150 publications and has been awarded as PI or co-PI on grant projects totaling more than $20,000,000. His publications range from highly selective, general readership journals, to top-tier disciplinary journals and specialty journals in entomology. His track record of research support spans the range of competitive sources including the National Institutes of Health, National Science Foundation and USDA NRI program.

In addition to his research duties, Dr. Strand teaches introductory entomology to undergraduates and his laboratory often includes undergraduates in its research mission. He has advised 24 masters and Ph.D. students, mentored 25 postdoctoral scientists and hosted many visiting scientists from across the world. Numerous individuals from his laboratory have advanced to successful positions of their own in academia or industry.

Dr. Strand received bachelor and doctorate degrees from Texas A&M University. His post-graduate career began in 1986 as a NATO-NSF Postdoctoral Fellow at the University of London.