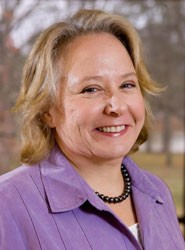 In 1995, Monique Y. Leclerc came to the University of Georgia to form the Laboratory for Environmental Physics. Now more than 10 years later, she has built a world-class experimental and modeling facility worth more than $1 million. The Griffin campus laboratory is an innovative program in climate change and biogeoscience and consistently attracts the best graduate students from universities in the United States, Canada, Brazil, Germany, Finland, Spain, Mexico, Korea, Thailand, India and China. Leclerc and her research team have published papers in some of the best journals in the field. And she ranks as one of the most cited authors in her field.

To date, Leclerc has brought in more than $21 million in extramural funding. The vast majority of her funding comes in the form of extremely competitive Federal grants from the National Science Foundation, the U.S. Department of Energy NIGEC and Terrestrial Carbon Processes. Her proposals rank systematically in the top two percent by the National Science and Engineering Research Council and in the top five to eight percent of Federally-funded U.S. proposals.

Leclerc shares her research on lectures on the interactions between vegetation and the overlying atmosphere at some of the finest institutions in the world and in the nation, including the University of Oxford, Harvard University, Yale University, National Center for Atmospheric Research, Oakridge National Laboratory and Argonne National Laboratory. She has lectured throughout Europe at the University of Oxford and served on a host of pan-European scientific and organizing committees as the only non-European member.

She is the youngest person to serve as president of the International Society of Biometeorology and the only woman to be named to the position. In 2008, Leclerc received the prestigious American Meteorological Society Outstanding Achievement Award based on her pioneering research on carbon exchanges and for global leadership in the advancement of biometeorology. Again, Leclerc is the youngest person to receive the award which typically goes to end-of-career scientists. This year she was named a University of Georgia Regents Professor, the highest honor bestowed to UGA faculty, based on her pacesetting and innovative contributions to science.

Leclerc received a Bachelor of Science at McGill University in Canada and a Masters degree in Agricultural Meteorology and a doctorate degree in Micrometeorology from the University of Guelph.