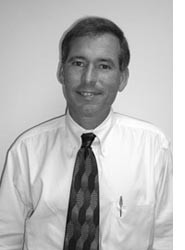 Dr. Paul Bertsch is a professor of Soil Physical Chemistry - Mineralogy in the Department of Crop and Soil Sciences and Director of the Savannah River Ecology Laboratory. He is a highly creative and productive scientist who has made significant contributions to understanding the soil chemistry of aluminum and mineralogy of aluminum-bearing minerals. His research on aluminum chemistry has improved our understanding of the role of this element in soil chemistry and plant and animal toxicity. His extensive work on delineating the chemical speciation of contaminants in the environment and on understanding the connection between chemical speciation and the mobility, bioavailability, and toxicity of contaminants is widely recognized as pioneering, and provided the basis of the formation of a new research area now widely known as molecular environmental science. His work has been widely recognized by researchers in many fields, including geology, chemistry, physics, and biology.

Dr. Bertsch has authored or co-authored more than 140 refereed journal publications. He has been invited to present his research results at numerous prestigious national and international meetings, including the 100th anniversary meeting of the American Physical Society and the National Academy of Sciences Colloquium on Geology, Mineralogy, and Human Welfare, where only 16 scientists worldwide were asked to participate. Dr. Bertsch has been elected to fellowship in the American Society of Agronomy and the Soil Science Society of America. He also received the Soil Science Society of America's Jackson Award for excellence in teaching and research in soil chemistry and mineralogy. He has served and continues to serve on many national and international scientific committees including the National Academy of Sciences National Committee for Soil Science and Committee on Earth Resources.

In addition to his research accomplishments, Dr. Bertsch has been involved in graduate instruction, mentoring graduate and undergraduate students, and University, College, and Departmental committees. He co-teaches a graduate soil and water chemistry course and has advised or co-advised 16 M.S. and Ph.D. students, has served on several graduate committees, and supervised 12 postdoctoral scientists. Finally, Dr. Bertsch has attracted more than $50 million in extramural funding during the last five years to support his research program.

In summary, Dr. Bertsch is a nationally and internationally recognized scientist that has made significant contributions to enhancing environmental quality and human welfare.