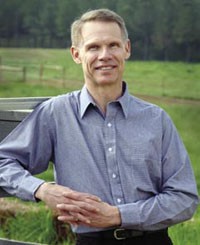 Professor Centner’s research focuses on agricultural and environmental policy issues and analysis of contemporary problems that affect producer and firm profitability. Among his peers, he has redefined the standard of excellence for agricultural legal research by using scholarly analyses followed by multidisciplinary applications to compare options. Because of his research, scientists and policy makers have eliminated some of the legal impediments that diminish the economic returns of our agricultural sector.

Professor Centner’s research has led to numerous changes in laws and regulations. One of the most significant involved protecting Vidalia onions against counterfeiters. By securing federal trademark protection for Vidalia onions through a certification mark denoting regional origin, the onions were granted Mark No. 1,709,019 by the U.S. Patent and Trademark Office.

Research on anti-nuisance protection led to the revision of the Georgia Right-to-Farm Law. This law has been critical in curbing nuisance lawsuits against agricultural producers and business firms. After the Iowa Right-to-Farm Law was held unconstitutional, Centner examined right-to-farm laws to articulate legal justification for upholding them as valid exercises of police power. This research should help preserve important agricultural protection.

His book, Empty Pastures, probes the changes taking place in our rural landscapes. The
dwindling numbers of livestock in America, he says, are a symptom of a broader transformation, one with serious consequences for the rural landscape and its inhabitants.