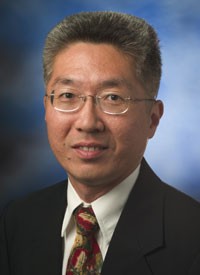 Dr. Yen-Con Hung's research is focused on applying innovative processing technologies to ensure the safety and quality of foods. Born in Taiwan, Yen-Con received a bachelor's degree from the National Taiwan Ocean University and Ph.D. from the University of Minnesota.

In 1985, he joined the faculty of the University of Georgia College of Agricultural and Environmental Sciences working on postharvest handling and storage with microwave and thermal energy for pasteurization. This research resulted in numerous honors including the prestigious American Society of Agricultural and Biological Engineers New Holland Young Research Award, the UGA Creative Research Medal and the Gamma Sigma Delta Senior Faculty Research Award.

Yen-Con is also a world-renowned scientist and expert on food freezing. He edited Quality in Frozen Food and has written several book chapters and review articles on the topic. From 1991 to 1999 he was a U.S. representative to the Commission C2 (Food Science and Engineering) of the International Institute of Refrigeration, an international treaty organization. In 1999 he was appointed vice-president of the commission and is currently serving his third term.

In 1997, Yen-Con began studying the use of electrolyzed (EO) water as a non-thermal environmentally friendly technology for disinfecting without the use of harmful chemicals. The technology he invented allows the production of EO water at near neutral pH state, eliminating many of the challenges to the safe storage and commercial use of the product. The technology was licensed to EAU Technologies, Inc. in 2003. Since then it has been featured in numerous UGA press releases and scientific society publications such as the American Chemical Society and the American Institute of Physics.

Yen-Con was a key member in the establishment of the annual UGA Food Safety and Trade Summit with the Shanghai Academy of Agricultural Sciences (SAAS) and Shanghai Ocean University in 2007. He facilitated the signing of a MOU between UGA and SAAS in 2009. The Shanghai Municipal People's Government recognized his support of Shanghai's development and research collaborations by awarding him the 2010 Magnolia Silver Award.

As of the end of 2010, he has been the principal or co-investigator on grants and contracts totaling more than $9 million. He has published more than 130 scholarly refereed journal articles and more than 200 abstracts and proceedings. He recently received a new five-year $5 million integrated grant from the USDA-AFRI to investigate the use of EO water and other processing technologies to inactivate Shiga toxin-producing E. coli and viruses during beef processing.